Magic mushrooms, kratom, CBD, LSD, DMT, and ayahuasca have gradually moved from being termed as illegal substances to becoming one of the best discoveries scientists and humans will ever make. Although these items have existed for as long as humans can remember, their therapeutic benefits became more pronounced recently when the need for a more potent and less toxic remedy for mental disorders became the order of the day.

Although shrooms and ayahuasca may have been used as a natural remedy for a vast array of mental disorders, including anxiety and depression, their mode of activity, chemical content, part of the brain (receptors involved) tend to differ a bit. As the world becomes more aware of the potential therapeutic benefits of shrooms and ayahuasca, it is important that we know how these two compounds (plants) relate or differ.

It is pertinent to note that magic mushrooms and ayahuasca have been widely used for millennia for mystical experience (trip), sacramental ritual, and healing. Both are currently being explored in modern research and culture. Before we explore the similarities between the duo, it is important that we have a background on what both stand for.

What are Magic Mushrooms? 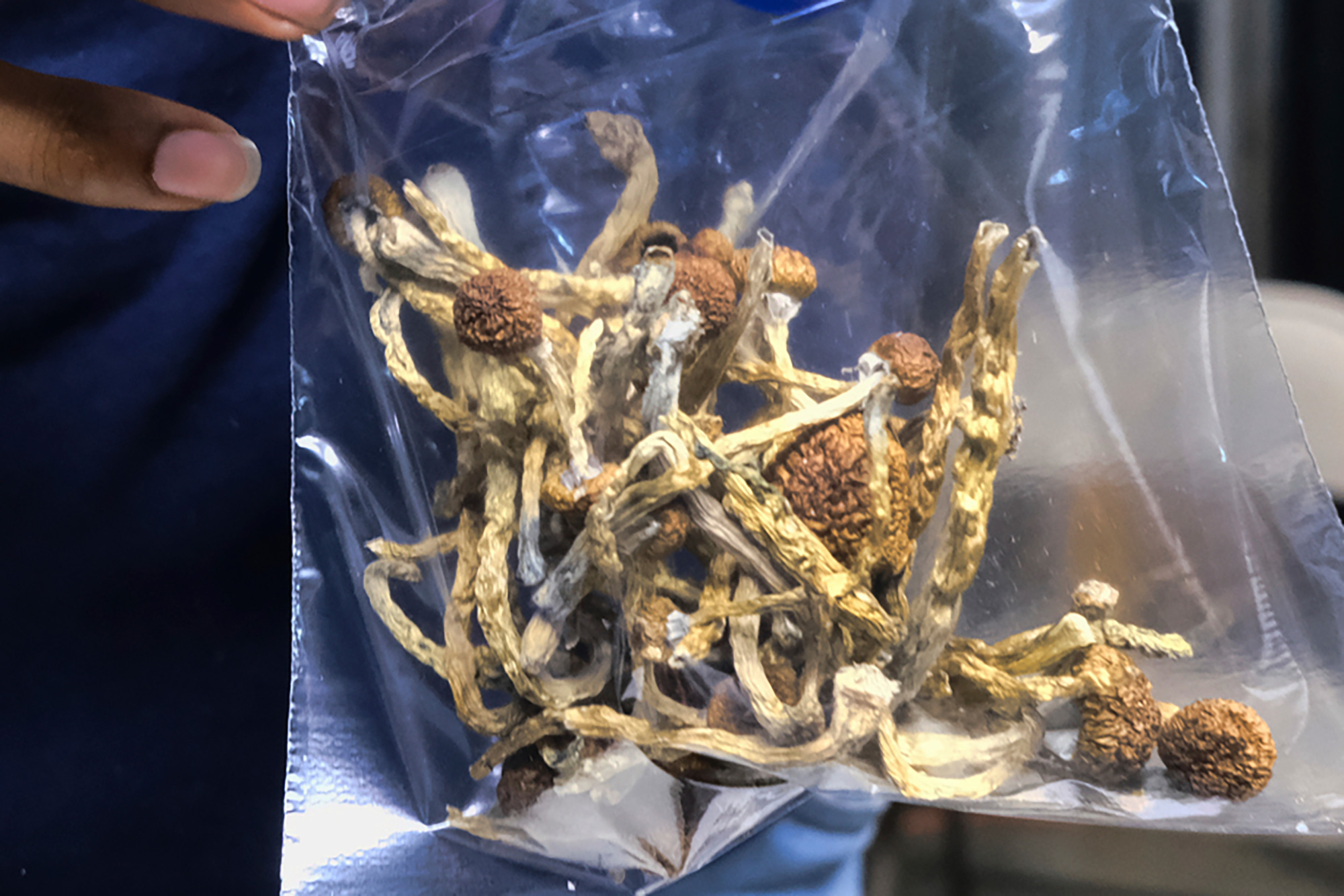 Magic mushrooms, also known as psilocybin mushrooms or shrooms, are a group of mushrooms belonging mostly to the psilocybe genus. Psilocybe mushrooms are gilled mushrooms found growing everywhere in the world. They mostly contain psilocybin, psilocin, baeocystin, and aeruginascin. Although these compounds can exist on their own, they are analogs of psilocybin, hence the name psilocybin mushrooms. Although most magic mushrooms belong to the Psilocybe genus, species from other genera may also contain trace amounts of psilocybin. These genera include but are not limited to conocybe, copelandia, galerina, Gymnopilus, inocybe, panaeolus, pholiotina, and pluteus. At the time of writing this article, over 200 mushrooms contain psilocybin and can trigger a psychedelic experience.

Actively growing shrooms are found as medium-sized, brown to yellow-brown fruiting mushroom bodies. The fruiting bodies are usually small and nondescript. They are naturally found growing on decaying organic matter or as cultivated mushrooms for medicinal or recreational purposes.

As stated earlier, magic mushrooms contain psilocybin, a psychedelic compound used for several years in traditional, medicinal, and religious ceremonies. Members of the psilocybin mushrooms are collected and grown as an entheogen (a drug that can cause someone to become more inspired or experience feelings of inspiration, often religiously or spiritually) and recreational drug even with its illegal status in many countries. Did we just say shrooms are illegal? Take a deep breath and follow us as we uncover the mystery and answer the question.

Psilocybin in shrooms can interact with several receptors in the body leading to a cascade of effects ranging from relieving stress to triggering the release of feel-good hormones and serving as replacement therapy for addicts.

Known by the common name la purge, tea, and the vine, ayahuasca is a South American brew made from the ayahuasca vine (Banisteriopsis caapi), also known as the vine of the ancestor and the leaves of chagropanga (Diplopterys cabrerana) and chacruna (Psychotria Viridis) shrub. The products may sometimes contain other ingredients that serve to amplify the effects of the tea or make the effects more bearable.

Ayahuasca drink has been used for several years for spiritual and religious purposes by ancient Amazonia tribes. The drink is associated with healing and has made several appearances in religious ceremonies where the locals used the brew in warfare, divination, or for artistic inspiration. It is often the main theme of cultural narratives.

The healing properties of ayahuasca have been widely utilized in identifying the origin of illnesses, triggering shamanic journeys to restore soul loss, and the extraction of pathogenic objects from the body.  The brew is common among locals in North America, Brazil, and South America.

Ayahuasca is generally used as an instrument for gaining access to information from the spiritual world as well as striking a balance between the natural and social environment.  During traditional ceremonies, the curandero or shaman, who is usually an experienced healer, is tasked with leading the Ayahuasca ceremonies. The healer brews prepare the brew by boiling the leaves and vine in water.

How do they differ?

Although psilocybin mushrooms and ayahuasca share similarities in serving as important items during religious ceremonies and triggering a psychedelic experience, the duo differs in their application mode, chemical composition, mode activity, and more. Let us take a look at some of the most common differences between the two.

When ingested, both shrooms and Ayahuasca produce a similar psychedelic effect. This is because they can interact with neurotransmitters in the brain. The two are made up of active forms of tryptamines, a naturally occurring alkaloid found in several plants and life forms around the world. While magic mushrooms’ effect stems from a single source, the effects are Ayahuasca brew comes from the combination of different compounds in the plants. The chemical compositions of Ayahuasca and shrooms will be discussed later.

As stated earlier, shrooms come with a combination of phytochemicals (plant-based chemicals) like psilocybin, psilocin, aeruginascin, and baeocystin. The major constituent of shrooms is psilocybin, while the rest exist as its analogs. The compounds in shrooms can act singly or in synergism to produce their effects on the users. Although psilocybin is highly psychoactive, its psychoactive effects are inhibited via interaction with aeruginascin, an inhibitory compound existing in trace amounts in shrooms.

Remember that Ayahuasca is a combination of plants with different chemical compositions. The shrubs of D. caberana or P. Viridis come with an active concentration of N, N-Dimethyltryptamine (DMT), while the vine of B. caapi contains B-alkaloid compounds like harmine, harmaline, or d-tetrahydroharmine.

DMT is a schedule 1 drug (drugs that have a high tendency of abuse) and can quickly breakdown to produce a psychoactive effect on users. The presence of alkaloids from the B. caapi vines tends to provide inhibitory roles on the psychoactive effects of DMT. This is what allows users to experience several hours of Ayahuasca effects.

Psilocybin, when ingested, is broken down to psilocin. Psilocin is an analog of psilocybin and a cousin of DMT since the only difference in their structure is the 4-hydroxy group. Since both molecules share a similar structure, they can interact with similar receptors, thus behaving alike. Both compounds can be processed in the brain without needing an MAIO (monoamine oxidase inhibitor) to reduce the speed of their dissolution in the stomach.

During the preparation of Ayahuasca, the combination of herbs is boiled to increase extracts’ quality from the medicinal compounds. While Ayahuasca is a brewed tea, shrooms are taken in quite a number of ways.

The Ayahuasca brew is taken at night to improve visions. At the time of writing this, experts believe it is impossible to overdose on ayahuasca even though the effects are closely monitored by the shaman who is in charge of preparing the combination. The only precaution while taking Ayahuasca is rooted in the fact that users are expected to undergo an Ayahuasca preparation, following a preparation diet for weeks. This means users will have to abstain from certain foods, including pork, dairy, and fermented foods.

Psilocybin mushrooms, on the other hand, are available as capsules and brews, which can be taken at specific doses to reduce the effect of bad trips (side effects). Although experts believe it is not possible to overdose on shrooms, there are reports of bad trips triggered by taking too many doses of shrooms. Regardless of your health status, it is important that users focus on taking from low to high doses of shrooms.

The standard doses of dried shrooms range from 1-1.5g, while a dose of 2-5g will produce stronger sensory hallucinations or effects on users. The effects of shrooms can last from 6 hours to weeks, depending on the dosage.

Psilocybin mushrooms and Ayahuasca are amongst the most potent psychedelics in the world. They provide overlap in the visual effects and alter physical, mental perceptions. Information from research has shown that shrooms and Ayahuasca can provide relief from mental disorders, can assist in addiction treatment, and more.

Information from research shows that while the effects of ayahuasca can last from 4-7 hours on average, shrooms experience can last from 3-6 hours depending on the user’s dosage and health.

The legal status of shrooms and Ayahuasca vary from one region to the other. On this note, it is important to consult with local authorities on what is obtainable in your region. There is more research on the possible use of shrooms as an antidepressant. This was evident in how Oregon became the state to legally endorse the use of shrooms for depression. In line with making the use of Shrooms more widespread, several cities have decriminalized the substance, thus permitting supervised use. Canada has granted permission for psilocybin to be used for end-of-life therapy

It is quite impossible to know which is better between the two since they come with their uniqueness. You can let us know your favorite among the two by using the comment box below.